As Camp Newaygo celebrates 95 Years around the Campfire, we also are excited to reflect on those past decades as the community’s camp in Newaygo County. Throughout the year, we will be sharing stories from our history in this beautiful community both online and through TrueNorth’s quarterly publication-The Navigator. The Winter Edition included this piece about Camp’s connection with Newaygo philanthropist, William Branstrom. 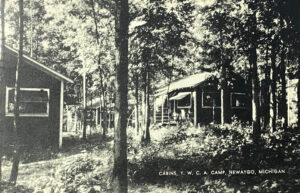 Connections are what make Camp Newaygo a place dedicated to serving Newaygo County. We are proud to be the only locally owned and operated camp in the county as a community program hub of TrueNorth Community Services. Nearly 95 years ago, Camp Newaygo’s roots connect to a prominent community member of Newaygo County’s early history.

William Branstrom, a name you might recognize from Branstrom Park in Fremont, was a local philanthropist back in 1926. Branstrom’s community-minded generosity had a wide reaching impact through things like Branstrom Park as well as the Arboretum in Fremont and gifts that supported the Hesperia Library, in honor of his mother, Amelia S. Branstrom . His love of nature and giving spirit inspired his gift of the original land for Camp Newaygo.

Nancy (Reber) Johnson remembers how her father and Mr. Branstrom would walk home for lunch from their law offices down main street in Fremont. The leisurely pace and conversation often left Nancy waiting on her lunch. It turns out that the Rebers and Branstroms weren’t just connected as neighbors. Nancy and her sister, Marge Salata, were some of the first campers to attend Camp Newaygo in those early years. 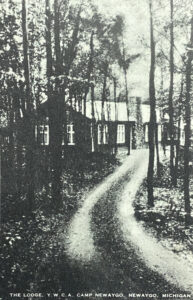 Thanks to early philanthropists like William Branstrom and local supporters today, Camp Newaygo will celebrate it’s 95th anniversary in 2021. Our traditional Girls’ overnight camp, Co-Ed Day Camp, environmental education programs, and community events build resilience and independence. As the community’s camp, we hope you find ways to connect with Camp Newaygo and that those who come to visit us from afar support the community we call home.